Bloodsucka Jones rises from the pages of legend to help a chronically confused David and would-be vampire hunter Tony, save David from his vampire girlfriend’s brother and his pop-collared cronies. 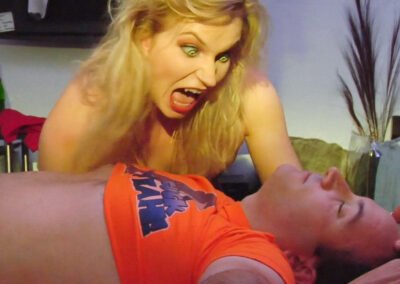 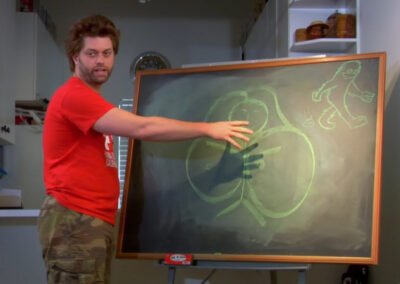 David (Justin Armao) is in love with a vampire, only problem is her pop-collared vampire brother doesn’t like the idea of his little sister dating a normal guy. Fearing for his life David enlists the help of the best vampire hunter in the area, Tony (Travis Woods). Tony is not very good at vampire hunting. In fact, most of his knowledge comes from comic books. The two of them are saved by the one and only Bloodsucka Jones (Preston Gant) and his sidekick Venessa (Maria Canapino) who take the two under their wing and train them in the arts of vampire killing.

Making a movie is hard and making a comedy is even harder, but writer/director Justin Armao was successful at doing both. “Bloodsucka Jones” is a great flick that is funny from start to finish. I don’t think there was a scene in this vampire comedy that didn’t leave me laughing. The film is full of great lines like “That which does not kill you makes you awesome”, “It’s like making love to a koala bear”, and who can forget “Can David catch vampirism through sexual intercourse?”.  The combination of good writing, quippy exchanges, and ridiculous characters is what makes “Bloodsucka Jones” work so well! We highly recommend the film and are proud to have it on New Village Video.